This weekend, Justin Timberlake may be a friend with benefits but he’s also an action star! The singer turned actor headlines Andrew Niccol’s upcoming sci-fi flick In Time, which has him teaming up with another beautiful lady — Amanda Seyfried.

Justin Timberlake and Amanda Seyfried appeared at this year’s Comic-Con on Thursday to premiere the first footage from their film. In Time centers on a futuristic society where aging is obsolete. Time has become a currency and it’s used to pay for basic necessities to avoid over-population. 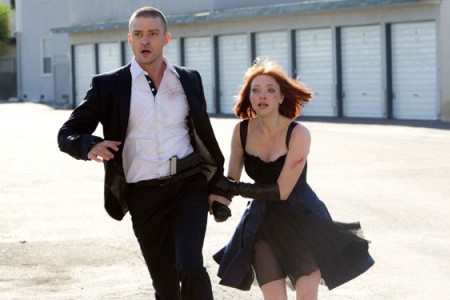 In this scenario, the rich can live forever (they can afford it) but the poor are dropping like flies. Justin Timberlake plays a poor man who unknowingly inherits the time of a wealthy upperclassman (played by White Collar’s Matt Bomer), who commits suicide. To the naked eye, it looks like Timberlake’s character killed the guy and stole his hours.

The following footage was shown at the In Time Comic-Con panel and features appearances by Olivia Wilde, Vincent Kartheiser, Cillian Murphy and Alex Pettyfer. This extended trailer really drives the premise home — time is of the essence.

In Time opens in theaters October 28.