Justin Bieber is taking a month off, according to an interview with The Hollywood Reporter, to think, pray and grow up. This revelation is in light of working for three years straight without a proper break and in the process, becoming a worldwide phenom and the face of prepubescent love for tween and teen girls everywhere. 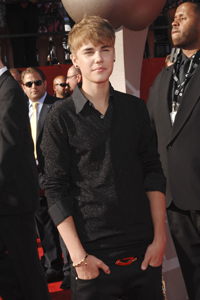 Justin Bieber revealed that he needs a month off from being “the Biebs.” Hey, it’s hard work being a pop idol, one half of the most sensational teen dating couple (he’s been with Disney pop-tart Selena Gomez for about six months now) since Miley Cyrus and Nick Jonas, and a multi-millionaire to boot. But we digress.

Bieber, 17, has been taking time to just stop and smell the proverbial roses in his life, and enjoy a little of the success he has earned. He recently granted an interview to The Hollywood Reporter and revealed, among other things, how he plans to spend his summer vacation.

“I’ve been working so hard,” he revealed. “I am taking a month off. It’s been just great to think and enjoy hanging out with my friends. I’m still growing up and when you’re working every day, you don’t really get a chance to figure out who you are. So with the time off, I’m able to think, pray and just kind of grow up.”

He also explained his feelings upon finding out that his fragrance, Justin Bieber‘s Someday, is the number one scent in the industry and how he plans to give back from the generosity of his fans to those in need.

“When I was on tour last summer,” he related, “I had Make-a-Wish in most cities. For so many people, their wish was to meet me and when they did, they were so hopeful and that’s a great feeling. I just wanted to help as many people as I could.”

Sales for Someday are expected to top $30 million, making it the biggest fragrance launch ever. Besides Make-a-Wish, proceeds are also going to Pencils of Promise, a charity aimed at helping to provide education for children in developing countries.

Said Bieber, “It’s about encouraging young people to help other young people. I try to motivate my fans to make a difference as much as they can.”

Awww, kinda makes you want to grab the Bieber in a big old bear hug, while wearing his fragrance of course!