Lindsay Lohan was back in court today wearing $1200 shoes and, true to form, had an excuse for why she has not had court-ordered psychological counseling. Financial issues. Did we mention her lips looked newly plumped? 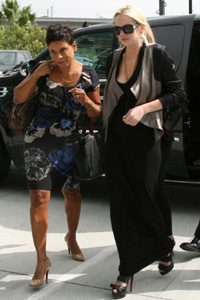 Lindsay Lohan came up with yet another good excuse while she was back in court today for a progress report on her probation. The troubled actress recently finished serving 35 days of house arrest after pleading no contest to misdemeanor necklace theft.

Judge Stephanie Sautner, like many of us, seemed annoyed with Lilo. The judge got on her for not completing all of her community service (she has only completed four days out of 60 after two months) and for not enrolling in court-ordered psychological counseling.

“I’m not going to give her five extra minutes. I don’t want to hear, ‘Oh, I couldn’t do it because I was on the set of the John Gotti movie,'” the judge said.

Her excuse? Wearing a long black dress and black Louboutin heels worth an estimated $1200, she said “financial issues” have prevented her from getting the ordered psychological treatment — and she can’t attend the less expensive group counseling because “paparazzi issues” would disrupt her treatment.

It looks like financial issues have not prevented her from getting her lips freshly plumped. But, let’s move on…

“If she doesn’t have the means [to pay for it], she’s got to find someone to help her out,” the judge said, giving her 21 days to show that she is enrolled in psychological treatment.

Lohan is on probation for three years and was ordered to complete all her community service by the end of this year.