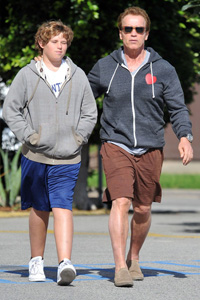 It has been a tough year for Maria Shriver and Arnold Schwarzenegger, however, the entire family is pulling together after a surfing accident left their son, 13-year-old Christopher, badly injured.

The accident, which happened last weekend in Malibu, left the teen with multiple broken bones and a collapsed lung. He spent many days in the intensive care unit but his condition is improving and has been upgraded. TMZ is reporting that Christopher will be OK.

“Christopher has been in ICU since Sunday,” an insider tells People. “Maria has not left his side and is sleeping at the hospital.”

Arnold has also been a frequent visitor to the hospital.

Arnold and Maria are in the middle of a court battle, as the couple is splitting after 25 years of marriage after it was discovered that Arnold had a love child with their housekeeper, Mildred Baena. Arnold recently asked the court to not award spousal support to Maria, and said that all the legal fees should be split evenly.

In addition to Christopher, Maria and Arnold are also parents to three other children.

Best wishes for a speedy recovery to Christopher Schwarzenegger.