Chris Brown has alienated himself from his neighbors in his ritzy Hollywood condo building with extremely bad behavior — and they’ve had enough! 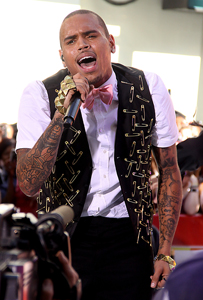 Neighbors in Chris Brown‘s condo building say the 22-year-old star behaves like a total jerk and they’ve had enough.

The other condo owners say Brown regularly parks in handicapped spots, blasts music at all hours, parties day and night, races his dogs in the common hallways — and they are even accusing him of vandalism after the initials “C.B.” were found carved into an elevator door.

Brown, as usual, says the world is out to get him and it’s all a conspiracy. On his Twitter page he wrote, “My neighbor carves my name in our elevator to incriminate me so it looks like I’m a reckless 22 year old.”

“My parking spaces in my building that were assigned to me when I [bought] this crib are painted over with handicap and no Parking signs.”

Brown’s lawyer says what Chris is saying about the parking spaces is true and that he is currently in litigation over it — but the building manager says Brown regularly parks in other handicapped spots, too.

“A person should be able to live in his or her own company of their house!” Brown wrote. “I’m barely home so these stories and accusations are so childish!”