Singer Chris Brown is set to appear in the upcoming romantic comedy Think Like a Man, but first he has to take care of his parking space problem. 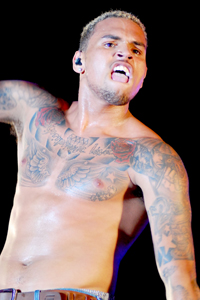 Here are two words we bet you never thought would make it into a Chris Brown story: Romantic comedy.

Brown, whose 2009 attack of then-girlfriend Rihanna caused the singer a deserved measure of infamy, has been cast in the big-screen adaptation of funnyman Steve Harvey’s book, Act Like a Lady, Think Like a Man.

“Congrats on landing a role in #actlikealady the movie!” Harvey said. “I’m proud of you man!”

The film, called Think Like a Man, will star Harvey, Gabrielle Union, Taraji P. Henson and Michael Ealy, according to the Associated Press, and it’s due in April. The book Act Like a Lady, Think Like a Man gives pointers for ladies on how to deal with troublesome men.

Brown has been contrite about the 2009 Rihanna episode, but there has been at least one incident since then when his emotions ran high in public. He trashed a dressing room on Good Morning America this spring following an interview which probed the Rihanna case. Brown later apologized for his actions.

We’ll have to see where another just-breaking Brown flash-point goes. This one has to do with the parking of Brown’s cars in his West Hollywood condo, according to TMZ. Brown’s Range Rover and sports cars are taking up handicapped spots.

“My parking spaces in my building that were assigned to me when I (bought) this crib are painted over with handicap and no Parking signs,” Brown tweeted late Thursday. “I feel I have to explain myself because my brand/life is always being slandered and tampered with! ITS GOTTA STOP!”

“No need for me to play the victim. Just wanna live my life and just make music!”

And now act. Brown, who received two MTV VMA noms on Thursday, has previously appeared in the movies Takers and Stomp the Yard. A request for comment from Brown’s rep was not returned.