Jennifer Aniston has been sporting what looks like an engagement ring, and her friends say she’s… “pre-engaged.” 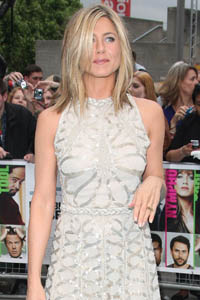 Jennifer Aniston and Justin Theroux are wasting no time in getting serious with one another. At the London premiere of Aniston’s latest movie, Horrible Bosses, the former Friends star looked to be intentionally flaunting an engagement ring.

So are they or aren’t they?

According to friends of the couple, Aniston and Theroux are “pre-engaged.” What’s that? Well, nobody’s sure other than the celebrity couple, but in theory it would suggest that they’re not quite engaged, but they’re just about ready to be.

“They’re kind of pre-engaged,” a friend shares. “We keep saying, ‘What’s with the rings? It’s only been a few weeks!’ But she says it feels right.” Other reports indicate the couple could be in the midst of planning an end-of-summer wedding.

That would be quite a sprint down the aisle, seeing as the couple has only been together “officially” for a few months. Still, Aniston has been bold about flaunting her relationship, taking her actor boyfriend to her taping of Inside the Actor’s Studio and her handprint ceremony at the legendary Grauman’s Chinese Theater on Hollywood Boulevard.

Meanwhile, friends report Aniston is transforming Theroux. “He has always been somewhat cynical and pessimistic,” a source says. “But he has a happy, upbeat vibe now, like he’s a better version of himself… Justin shaved his scruffy beard; he’s gone from looking like a dirty biker to a leading man. The motorcycle boots have been replaced by Gucci shoes. Jen has been spoiling him with facials and pedicures.”