Tiger Woods’ former caddie is not too pleased about his firing. 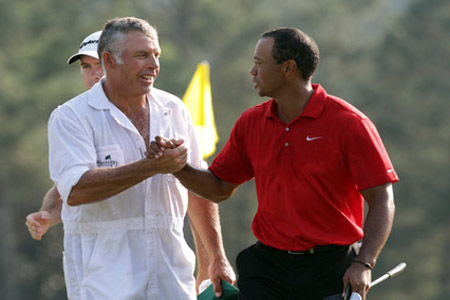 “Tiger Woods announced Wednesday that he and caddie Steve Williams will not be working together in the future,” an announcement on Woods’ website reads.

“I want to express my deepest gratitude to Stevie for all his help, but I think it’s time for a change,” Woods said in a statement. “Stevie is an outstanding caddie and a friend and has been instrumental in many of my accomplishments. I wish him great success in the future.”

Williams is pretty bitter about it.

“Following the completion of the AT&T National I am no longer caddying for Tiger after he informed me that he needed to make a change. After 13 years of loyal service needless to say this came as a shock,” Williams said on his website. “Given the circumstances of the past 18 months working through Tiger’s scandal, a new coach and with it a major swing change and Tiger battling through injuries I am very disappointed to end our very successful partnership at this time.”

He wasn’t done talking about his anger.

“I’ve been incredibly loyal and then to have this happen you could say I’ve wasted two years of my life,” Williams added in a radio interview.

“I took a lot of heat during Tiger’s scandal, not just myself but my family as well, and never really got pardoned from that scandal. I would have to say given what transpired 12-18 months ago, I think anybody in my situation would say they didn’t have total respect. That respect would have to be earned and this situation is definitely not earning my respect.”

We get that Williams feels slighted, especially after putting up with the aftermath of Woods’ cheating scandal. However, he was paid millions for his service — and at the end of the day it was just a job. Plus, it’s not like he’s unemployed.

“I have had the opportunity to work of late for Australian Adam Scott and will now caddie for him on a permanent basis. Having started my caddying career with Australian great Peter Thompson and working for Greg Norman in the ’80s I am excited about the future working for another Australian.”

Do you feel sorry for Steve Williams?