Lindsay Lohan appeared in court today so the judge could determine how well the actress is doing with her court-ordered probation requirements. And as it turns out, Lohan has to do better if she wants to stay out of jail. 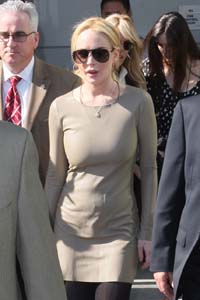 Judge Stephanie Sautner had Lindsay Lohan in her courtroom today and while it wasn’t entirely bad for Lohan, it wasn’t great. Lohan was told she has 21 days to start counseling or she can spend some time in jail instead of on a psychologist’s couch.

The latter sounds better to us.

Why hasn’t Lohan started her court-ordered psychological counseling? According to her lawyer, Lohan doesn’t have health insurance. CNN reported that Lohan hasn’t worked in the last year, so her Screen Actors Guild insurance lapsed.

Unfortunately for Lohan, Judge Sautner didn’t really care. “Maybe she knows somebody who can help out,” Sautner said.

Ouch. But really, is the cost of counseling keeping Lohan from fulfilling the terms of her probation? Doubtful, as her court-ordered community service requirement is free and Lohan isn’t exactly jumping all over that. Lohan has only completed 33 hours of community service. She was ordered to complete 480, so she has a ways to go.

Specifically, Lohan must complete 360 hours of community service at a women’s center, followed by another 120 hours at the Los Angeles County morgue.

“She can’t be nickel and diming these hours,” Sautner said, as reported by E Online. “Trust me, she is going to get held to that deadline. She is not going to get five more minutes. I know there is a movie deal. I will not take into consideration — ‘sorry, I’m at the Gotti movie’ — I will not do it. She needs to complete the community service within the year.”

Lohan completed 35 days of house arrest last month — a nice light alternative to the 120 days of jail she was sentenced to for her probation violation/necklace theft cases. But that doesn’t mean she’s off the hook for the terms of her probation.

Hopefully Lohan can get herself into counseling and avoid jail time — again.