Arnold Schwarzenegger has hit back at Maria Shriver’s divorce petition, and he doesn’t want to pay up. 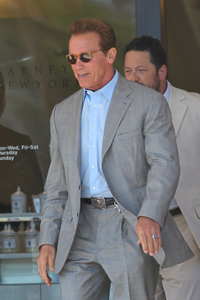 It’s shaping up to be an incredibly costly divorce, but Arnold Schwarzenegger doesn’t want to pay a penny more than he has to. The Sperminator has answered Maria Shriver’s divorce petition, and he is taking exception to some specific financial requests.

Schwarzenegger asked the judge to terminate Shriver’s right to spousal support, which she specifically requested. She also asked that Schwarzenegger pay her legal fees, which he doesn’t want to do.

Frankly, since this whole mess started because he couldn’t keep it in his pants, the legal fees are his fault.

The couple is worth a reported $400 million and had no prenup — they were worth substantially less when they wed 25 years ago. Under California community property law they are both entitled to a 50/50 split of assets. Since Arnold is reportedly keeping the pricey family home, he will have to buy her out of her half in cash, or comp her with other valuable property.

Arnold hasn’t starred in a movie since 2003 but has signed on for the Western thriller Last Stand, so he can make back some of those millions.