Prince Albert is lashing out against talk that his new royal marriage was on the rocks before it even started. 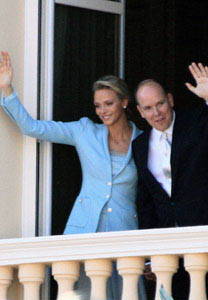 Prince Albert has had enough of all the rumors that he and his wife, Princess Charlene, are headed for royal divorce court. In an attempt to quiet the chatter, the prince sat down with members of the press to reassure the gossiping public that his new marriage is perfectly fine, thank you very much.

The same day the newlyweds returned from their honeymoon in South Africa, where the new bride, Charlene Wittstock, was raised, the royal couple called three media outlets to meet with them in an attempt to silence the critics.

“We want to express our outrage about these rumors. It’s unbearable,” the prince, who was described as “visibly… wounded,” admitted.

Before the wedding took place, unverified reports emerged that Wittstock had purportedly “fled” and was planning on leaving Monaco before the wedding occurred but was wooed back and stayed. Speculation as to why there may be trouble included rumors that the prince had fathered yet another child out of wedlock.

“What is regrettable is that the media seized on these rumors without verifying their information,” the prince continued.

Throughout the interview, the bride and groom held hands. At the end, the princess was asked if she had anything to say in addition to what the prince had said already.