Andrew Garfield has finally made his live-action debut as The Amazing Spider-Man! After a bootleg trailer of Marc Webb’s superhero reboot surfaced on the net earlier this week, Sony has decided to release the real thing. 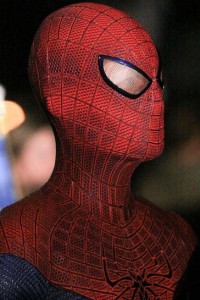 The official trailer for The Amazing Spider-Man takes us back to Peter Parker’s youth. It tells an origin story about a young man plagued by abandonment issues and the social awkwardness of high school.

Instead of falling in love with the fiery red-haired Mary Jane Watson, The Amazing Spider-Man pulls on the heartstrings of Emma Stone. The actress plays Gwen Stacy, Parker’s other well-known, comic book girlfriend. The character previously appeared in Sam Raimi’s Spider-Man 3, where she was played by Bryce Dallas Howard.

Aside from Andrew Garfield and Stone, The Amazing Spider-Man features Martin Sheen and Sally Field as Peter’s Uncle Ben and Aunt May, Denis Leary as Gwen’s dad George Stacy and Rhys Ifans as the doctor turned villain Curt Connors aka Lizard.

Do you think this group of talented actors has what it takes to revamp this web-slinging franchise? Only time will tell!