Ryan Gosling upped his hottie quotient Wednesday night when he brought his dog to his interview with Jimmy Fallon. 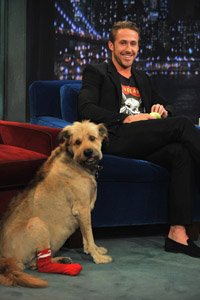 Just when you thought Ryan Gosling couldn’t get any hotter or more adorable, he shows up on Late Night with Jimmy Fallon with his mohawk-wielding dog in tow.

“He’s more interesting than I am, so I just thought it would be helpful,” Gosling said of his dog, George. The actor spent much of the interview biting off bits of apple for his pooch.

“He insists on it,” the recent NYC transplant said. “Ten years ago I shaved a mohawk just for the summer. And then, every time it started to grow out, he turned into a total jerk. And then, I’d shave it back and he’d turn into a nice guy again.”

Fallon also had to ask why George, described by Gosling as a Muppet, was wearing a sock on his hind leg.

“He’s got a hot spot,” Gosling said of his dog’s affliction. “You know, they chew on their feet.”

The Fallon interview caps off Gosling’s week of interviews to promote his new movie with Emma Stone, Crazy, Stupid, Love. He’s done other adorable things in interviews this week, including lifting Al Roker above his head a la Dirty Dancing and discussing the Florida trailer park caste system with Dave Letterman.

Hey, Ryan: We’re totally available anytime you want a dog park buddy for George… you know, since you’re new in the city and all. Just give us a ring.

Are you looking forward to Crazy, Stupid, Love?