The Dark Knight Rises is arguably the most anticipated film of summer 2012. Warner Bros. knows that fans have been foaming at the mouth over the final chapter of Christopher Nolan’s Batman series so they’ve decided to give us a teaser trailer.

The Dark Knight Rises plot hasn’t been released to the public because Christopher Nolan likes to keep his scripts under lock and key. But we do know that the cast will feature the famous villainess Catwoman (Anne Hathaway) and the physically imposing Bane (Tom Hardy). 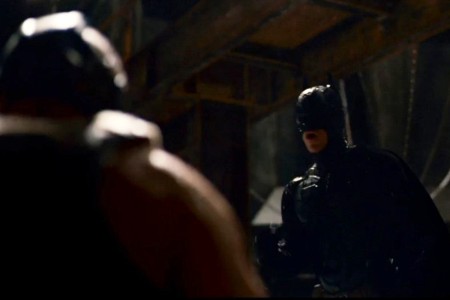 The teaser trailer doesn’t tell us much about what to expect from the new film. It mostly features footage from Batman Begins and The Dark Knight, paired with Gary Oldman’s Jim Gordon giving a gloomy narration. He’s talking to a shrouded Christian Bale about the needed return of the exiled Batman.

The trailer’s climax is at the end when Batman is gearing up for an attack from Bane, who is slowly approaching him from a flight of stairs. The shot leaves a lot to the imagination and a lot to be desired but it is a teaser. What else should we expect?

We can only hope that the theatrical trailer will feature Anne Hathaway as Selina Kyle/Catwoman. Marion Cotillard is also set to appear in the film as well as Joseph Gordon-Levitt. There’s plenty more where this footage came from and we can’t wait to see it!