Weston Cage has been arrested for domestic violence for the second time this month.

It’s pretty clear that Weston Cage has some major problems. The son of actor Nicolas Cage has been arrested for domestic violence for the second time in a month after a violent argument with his wife Nikki Williams. 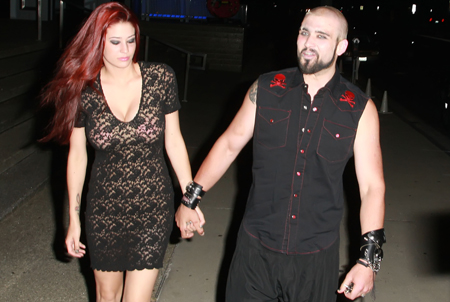 Cage, who recently shaved his long Goth locks, was arrested by the LAPD early yesterday morning, and when cops arrived they found him covered in scratches — thought to be self-inflicted, perhaps in an attempt to frame Nikki.

Cage’s wife is pregnant, as he revealed in a bizarre series of Facebook posts earlier this month.

“Nikki is safe and away from him,” Williams’ mother told TMZ, despite the young woman’s defense of her husband after they were both arrested a couple of weeks ago.

Cage is still sitting in jail awaiting $50,000 bail. This is his third run-in with the cops this summer. In addition to his earlier domestic violence charge, he was placed under psychiatric observation after freaking out on his trainer at a Hollywood restaurant in June.

All of these incidents have ended Cage’s hopes of a UFC career. While the troubled Hollywood kid said he’s been training for the ring, UFC head Dana White has pretty much squelched that dream.

“I would never allow Weston Cage to set foot in a UFC ring after two domestic violence arrests,” he said.

Sounds like that’s the least of Weston’s troubles at this point.