Lindsay Lohan is being sued by the former Betty Ford worker who said the actress injured her during a fight over curfew. 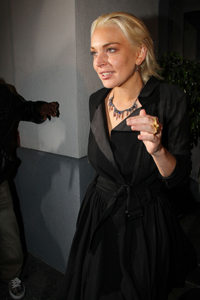 The trouble never ends for Lindsay Lohan. Remember that little disagreement she got into with a counselor at the Betty Ford Center last summer? She may have thought that was all behind her — no charges were ever brought — but that fateful night is coming back to haunt her in the form of a million dollar lawsuit.

Dawn Holland — who now goes by Dawn Bradley — says that Lohan was combative and violent when she returned to the sober living house after breaking curfew and being asked to take a Breathalyzer test.

Holland claims Lindsay Lohan grabbed her wrist to get the phone out of her hands — she was trying to call the police, she says — and began “twisting and pulling it for 8-10 seconds.”

This is a key portion of the statement, because Holland never mentioned the wrist grab in her initial incident report to Betty Ford officials. It also doesn’t help that Holland defended Lohan in January.

Holland was fired from the clinic after they decided that her talking to TMZ every day was totally against federal patient privacy laws. She is seeking at least $1 million for her “great mental, physical and nervous pain and suffering.”

It’s shaping up to be another crappy day for Lindsay. In addition to this lawsuit, she has been called back to court for a progress report hearing, and rumor is that the LA City Attorney wants to revisit her failed alcohol test. Keep checking SheKnows for updates!