Shannen Doherty is planning her wedding — and you can watch her every bridezilla move on her new reality show. 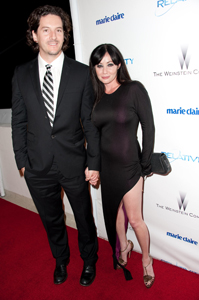 Former 90210 actress and notorious bad girl Shannen Doherty is getting married to celebrity photographer Kurt Iswarienko, and we get to see all the planning Hollywood-style! Doherty is channeling her inner Kim Kardashian and introducing a new reality show showing the lead-up to her big day — and her walk down the aisle.

The Shannen Doherty Project (name subject to change) is an eight-part unscripted series set to air on WEtv and will show the “complicated and often hilarious” efforts of the couple to mesh their lives together, according to a statement from the network.

“This is an opportunity for audiences to get a rare sneak peek into the real Shannen, who has been notorious about guarding her private life,” says WE’s Senior VP of Original Programming and Development John Miller. “Her situations are familiar and [that’s] what will make this series stand apart from other celeb-reality shows.”

The show will air in 2012. Production begins in August — maybe they’re waiting until after Kim Kardashian’s wedding date to get some tips?

Doherty has been married twice before: Her union with Ashley Hamilton lasted a whopping nine months, and her marriage to Paris Hilton’s sex tape partner Rick Salomon was annulled after nine months. Let’s hope this walk down the aisle is longer-lasting.