Recent photos of Sarah Palin’s new daughter-in-law have spurned well over their allotted 1,000 words. Sure looks like a Palin baby is on the way! 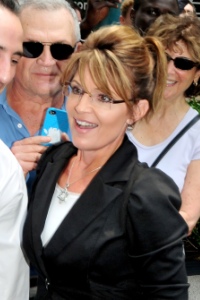 Sarah Palin appears to have much to celebrate! Word has it the 47-year-old, who is already grandma to Bristol Palin‘s son Tripp, will soon be welcoming another baby into the family, this time courtesy of eldest son Track Palin and new wife Britta.

Facebook photos of Britta at a baby shower, surrounded by gifts and holding up baby clothes have hit the Internet. The 21-year-old, who wed Track Palin just two months ago, appears to be in the third trimester of her pregnancy.

If the reports are to be believed, and thus far no one from Sarah Palin‘s camp has been willing to comment, Track Palin’s baby would be the second grandchild conceived out of wedlock for the abstinence-only preaching politician. The first, of course, being teen mom Bristol Palin’s son Tripp with ex Levi Johnston.

In May, Sarah Palin showed her support for Track Palin and Britta’s nuptials by releasing a joint statement with her family saying, “Our families couldn’t be happier! These are two hard working, humble, active, studious young adults who grew up together. We’re tickled that after two decades of friendship we proudly witnessed their marriage, knowing their new life together will be blessed.”

Congratulations to Track Palin and Britta on both the wedding and baby news, and best wishes for the Palin baby’s safe arrival.

Bearing in mind there are names in Sarah Palin’s family such as Bristol, Willow, Piper, Track, Trig and Tripp — any suggestions for what this Palin baby should be named?