Captain America: The First Avenger is an utter delight. After Marvel Studios found its perfect Thor in Chris Hemsworth, they have captured lightning once again with the casting of Chris Evans as Captain America.

Where Chris Hemsworth was buff and brash in Thor, Chris Evans is equally as buff, yet his characterization of Steve Rogers and his alter ego, Captain America, is also beautiful. Evans brings an everyman swagger to the pop culture icon that is the superhero. 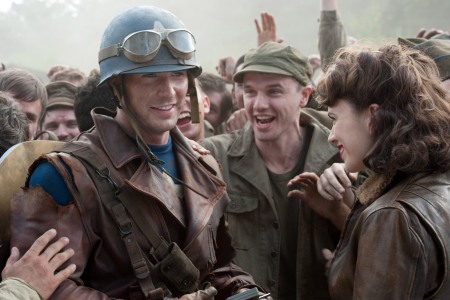 Through the initial scenes of Captain America: The First Avenger, Steve Rogers is short, scrawny and unable to serve his country in the dawn of World War II. He is surrounded by join-the-service propaganda, friends set to ship off to war and an innate sense of duty that cannot be fulfilled due to his hindrance of height and asthma.

Therein lies the utter joy of Captain America: The First Avenger — nothing comes easy or predictably for Cap or the audience adoring him. Evans delivers a performance that plays into the wheelhouse of why comic book movie adaptations have captured the continued fascination of the movie-going public since Tobey McGuire first donned the Spider-Man suit. His Steve Rogers is scrappy, sensitive and all superhero. Fine actors born to play these roles have fate ringing a loud bell. With Robert Downey Jr. as Iron Man, Hemsworth as Thor and Evans as Captain America, one can easily get excited about them joining forces in the upcoming The Avengers. 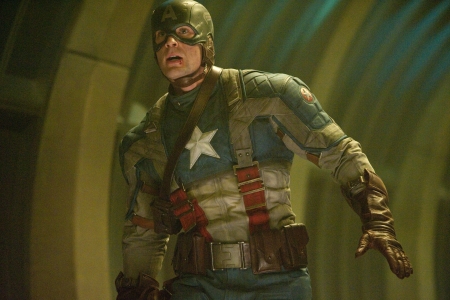 We would be remiss without giving a salute to the man who gives our hero his foil. Hugo Weaving (Lord of the Rings and Matrix trilogies) weaves a web of ultimate evil with his turn as the Red Skull. Weaving is an uncanny villain. Forget his performance as an agent in The Matrix — Weaving is a sensation in Captain America. If Nazis embody killer villainy, Red Skull’s army is full of super Nazis and witnessing evil incarnate only adds to the power of the film’s collision course of bad guy yin to Captain America’s good guy yang.

Captain America: The First Avenger has a Raiders of the Lost Ark feel that is irresistible. It’s not only the film’s World War II canvas, but also the way the characters, action and story pop off the screen.

A great superhero movie would not be fabulous without a solid love interest. Hayley Atwell rocks as Peggy Carter, a soldier on Colonel Phillips’ team who not only catches Evans’ eye, but also inspires him to move towards his true potential. Atwell is much more than eye candy — she wields a machine gun with authority and leads men into battle with the best and brightest of believability. 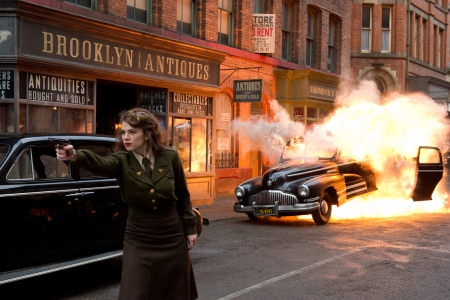 Captain America’s first modern trip down the big screen avenue is nothing short of the most fun audiences will have in cinemas this summer. There’s even a musical number that not only works, but whose chorus will be permeating through your head for days.

Check out our interview with Captain America himself, Chris Evans!>>