The estranged wife of Daniel Baldwin has been sentenced to 10 days in jail for violating her parole by getting drunk. 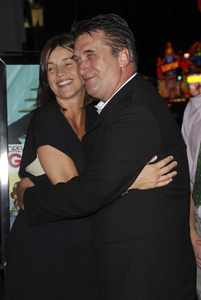 When Daniel Baldwin filed for divorce from his wife Joanne, he made it quite clear that her substance abuse problems were to blame. Now it turns out that he must have opened a giant can of worms, because his almost ex is being charged with violating her probation because she was drinking.

Joanne Baldwin was sentenced to 10 days in jail in Portland, Oregon for the probation violation but will probably be out by the time you read this because of credit for time served.

“I’ve been broken,” Joanne said to the judge.

In addition to the jail time, Joanne Baldwin’s probation has been extended by two years and she will have to wear a SCRAM bracelet a la Lindsay Lohan.

Daniel Baldwin filed for divorce and received an emergency order of temporary custody of the couple’s children after he says Joanne threatened to kill him.