Prince William and Kate Middleton have been reimbursed for a faulty entertainment system on their flight home from LA. 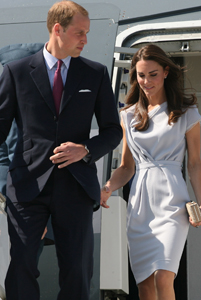 Okay, first of all, can you believe that Prince William and his lovely bride Catherine, Duchess of Cambridge, flew commercial back to England from their smashing royal trip to Los Angeles? It’s like the future Queen of England is just plain old common Kate Middleton again. But they did — the newlyweds hopped a British Airlines flight for the 10-hour journey home.

Of course, the royal couple flew first class like a boss, a luxury most of us will never experience since tickets start at over $11,000 apiece one way. When one pays that much for a plane ticket, one expects certain luxuries like unlimited movies on one’s personal television, right?

British Airlines agrees that the situation was absolutely untenable and gave everyone in first class, including Prince William and Kate, $300 vouchers for their trouble.

“Unfortunately a fault with some parts of the aircraft’s in-flight entertainment system couldn’t be fixed before the aircraft took off from Los Angeles,” a BA spokesman explained.

“We apologize to everyone affected and have offered customers either a voucher or frequent flyer miles to say sorry.”

Will and Kate got their movie fix in when they got home to Anglesey — the couple was spotted at the local movie theater catching a Harry Potter/Bridesmaids double feature.