Leonardo DiCaprio and Blake Lively seemed like a match made in Hollywood heaven, however, the couple has called it quits. What happened? Find out why Leo decided to cool things off with Blake. 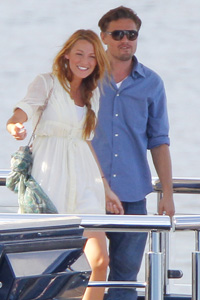 Leo, who is reportedly a huge mama’s boy, took his new girlfriend to meet his mom, Irmelin DiCaprio, in Italy. You would think Irmelin would love Blake — after all, she is beautiful and successful.

But Mama DiCaprio didn’t approve. Was it the nude pictures of Blake circulating the web that she disapproved of? Nope.

Blake was apparently so nervous to meet Leo’s mom, that she talked on and on and on about herself. After listening to Blake talk about Gossip Girl and her Chanel modeling gig, Irmelin made up her mind that Blake was too into herself and didn’t seem like the right girl for her Leo. Actually, the source said that his mom “couldn’t stand” Blake. Ouch.

Leo took his mom’s advice and told 23-year-old Blake that he wanted some space.

An insider reveals that Blake is a “total mess” and is devastated that their relationship is over because she really thought he was the one.

Tell us: Do you think Mama DiCaprio was too hard on Blake? Or was she right about her?