Hayley Atwell may be the envy of millions as the woman who not only fights alongside Steve Rogers/Captain America (Chris Evans), but who also shares one of the film’s rare romantic moments with the soon-to-be superstar.

Captain America: The First Avenger lands in theaters July 22 and the UK native Hayley Atwell leapt at the chance to portray a strong woman of the 1940s that reminded her of her grandmother. Another reason the Captain America shoot was a blast: She had a surprising affinity with shooting guns! 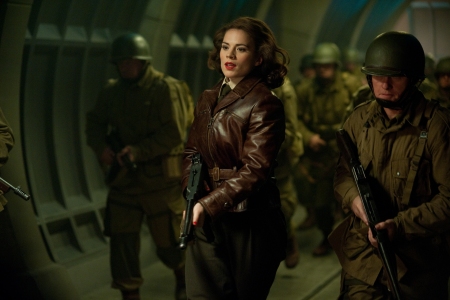 Atwell sat down recently to discuss the finer points of her soldier character, Peggy Carter, and how the woman in director Joe Johnston’s epic will set the standard for her for all upcoming roles that are deemed “strong women.”

SheKnows: It looks like you had quite a lot of fun with the film’s guns?

Hayley Atwell: I started off with a pistol and the director could clearly tell how much I loved working with it and said, “Oh, just give her a machine gun.” I was like, “Yes!” So I got to play with that for a few months. There’s lots of action in it and I’d love to do more of it. I think she’s quite stubborn, a slightly frustrated woman who struggles with being a woman in that time. But more importantly she’s a modern woman. So she’s very much a fighter.

SheKnows: What do you think your character Peggy sees in Steve Rogers/Captain America (Chris Evans)?

Hayley Atwell: He treats her very differently to how she’s been treated by lots of men, in this kind of dominated world she lives in. She sees something in Captain America that she relates to, and becomes kindred spirits.

SheKnows: How do you think Peggy and Steve Rogers relate? 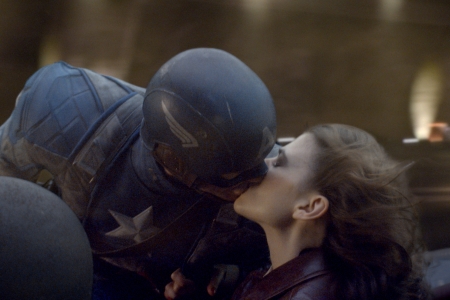 Hayley Atwell: It feels like a much more modern day relationship and it feels in a way that they’re kind of kindred spirits. She’s had her own struggles to get where she is because she’s a woman, as he has because of his physical disadvantage. So they kind of understand each other. So, she’s very much a fighter.

SheKnows: What did you enjoy most about playing Peggy?

Hayley Atwell: I loved the fact that she was a 1940s woman and she was strong — kind of reminded me of the strength that Bette Davis had and Katharine Hepburn had. It’s such a stylish time and I love that and I love the fact that she doesn’t need to be saved. I think Peggy’s someone who can hold her own around guys, obviously. She punches them in the face if they try anything, which was brilliant because I had her confidence while playing her — just to make sure I felt heard on set.

Hayley Atwell: Yeah, (expletive) that [laughs]. And why not, she was in a position where if she was like that, she wouldn’t be of that position. And when she says, “I know what it’s like to have a few doors slammed in my face,” I think because she’s this attractive woman who’s beautifully made up, she had to fight a little bit harder to get where she is to prove that she’s capable. And I think that’s great because there’s a kindred spirit between her and Steve, there’s an equality about them and I love that. I think of women in the ’40s like Bette Davis or Katharine Hepburn or my grandmother and I think, “Wow, they knew their power as women, so beautifully.” And Peggy in the script had that too, and I love that about her. 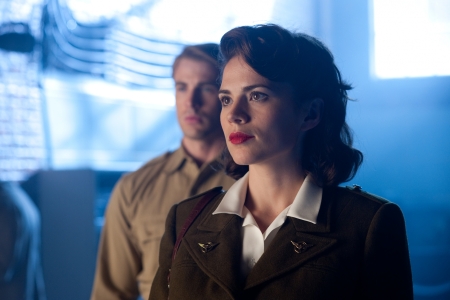 SheKnows: You’ve done a lot of period dramas — did you think Captain America would be poles apart?

Hayley Atwell: Yeah, I was looking to do something different, I had done a number of period dramas, and thought, “Yes, I’ve got an action film… Oh, (expletive) it’s a period again.” Will I ever break away [laughs]?

SheKnows: Now, how much of seeing Chris after that transformation from scrawny to sexy was real and not acting? You seemed a little impressed…

Hayley Atwell: I did [laughs]! I couldn’t help myself. It was instinctive. I hadn’t seen him with his top off until that moment. I was like, “Go for the man-boob.” [Director] Joe loved it, his note was, “Do it again.” So we did lots of takes just to see how far we could go. Then it got a little bit over the top. There was a little touch of the nipple, but then it became like a Saturday Night Live sketch. It felt like Austin Powers, really corny. But I like that they kept it in because Peggy’s a repressed character, a little uptight, and she’s trying to do the right thing. But if she was a man, she’d be Captain America, but never will, so there’s that longing.

Check out our interview with Captain America himself, Chris Evans!>>