Sofia Vergara has a radical approach to keeping her sexy figure in top shape: Forgo the fad diets and practice moderation. Gasp! 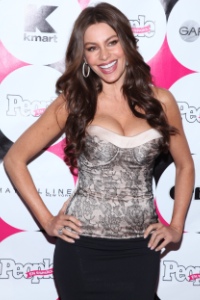 Sofia Vergara has been named amongst the hottest by many a magazine — and she’s loving it! Rather than complain that being labeled a “sex symbol” has restricted her image, Sofia Vergara has welcomed it.

“I love it,” 39-year-old Sofia Vergara tells Fox411. “Of course, it’s great at my age. It’s fantastic.” The actress, who plays Odile, an executive at a French cosmetics company in the upcoming Smurfs movie, isn’t one to turn down the extra attention.

“I think that everything that is positive and good helps out with your career,” she continues. “Why not embrace it and take advantage?”

Though her latest role is as Odile, Sofia has a different Smurf moniker in mind for herself: ‘Sexy Mama Smurf.’

Sofia Vergara’s work promoting The Smurfs caused her to miss the announcement she’s been nominated for an Emmy for her work on Modern Family. On the news of the honor she recalls, “I was sleeping! I am still like dead from my trip to Italy and doing promotion for Smurfs. I was enjoying my sleep but this is better than coffee.”

Best wishes to Sofia Vergara for a win!

53 mins ago
by Caroline Greelish