Linda Hamilton wants to take Marine Sgt. Ray Lewis to the Marine Ball — and she extended her invite on YouTube.

Terminator actress Linda Hamilton had the biceps of a well-conditioned Marine, so it only makes sense that the actress would volunteer to take Betty White’s place with Sgt. Ray Lewis at the Marine Ball. The Marine asked White after fellow Marines secured dates with Friends with Benefits stars Justin Timberlake and Mila Kunis. 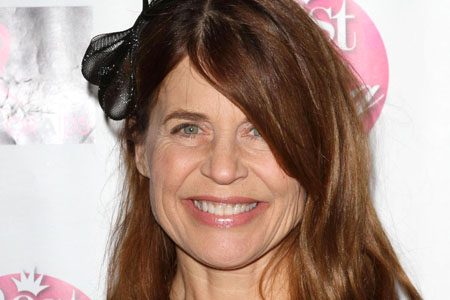 White had to turn down Sgt. Lewis’ invite earlier this week, thanks to her filming schedule on Hot in Cleveland.

“Betty called and I talked to her for hours and I know she feels terrible,” Hamilton said in her YouTube video. “So I just decided that I would try to reach out to you and say, ‘Look, I know that I am no Betty White, but I would be really, really thrilled if you can’t find anybody else, and I know that’s unlikely, but if you can’t find anybody else to go to the ball with you, I could go.'”

Hamilton apparently took it pretty hard — she said she “cried all night” when White had to turn down Lewis. The invite does seem sincere, but our cynical side thinks Hamilton just wants the publicity.

So, is Sgt. Lewis going to take Hamilton to the Marine Ball? No word yet, though he did respond.

“You are amazing,” he commented on the video.

You better invite her, Sgt. Lewis! We have a feeling she could beat you up otherwise.

Do you think Linda Hamilton should go to the Marine Ball with Sgt. Lewis?