Paris Hilton got a little hot under the collar when an ABC reporter implied she is a has-been — and the heiress walked out of the interview! 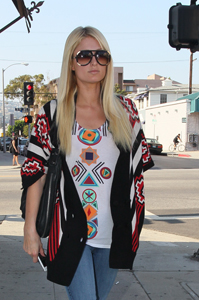 There are many things Paris Hilton is perfectly happy to talk about: Her love of tiny animals, her TV show, her relationships, even her sex tape. But one thing the reality star will not discuss is the fact that her star seems to be falling. One ABC reporter learned that the hard way.

Dan Harris was conducting an interview with Hilton while he and his camera crew got a tour of her admittedly lovely LA home when the reporter’s questions hit Hilton’s sore spot.

“Do you feel as if people like Kim Kardashian are overshadowing you?” he asked.

“Do you ever worry about your moment having passed?” he asked, obviously referring to the fact that her latest show, The World According to Paris, has bombed.

Oh no he didn’t! Paris was not amused, shut down the interview and convened a mini-conference with her publicist. Unfortunately for her, she forgot to turn off her mic. Fortunately for us, it gives great insight into how supposedly hard reporting is actually highly controlled by PR machines.

Check out the video of Hilton’s ABC interview walk-out:

All’s well that ends well, though. Paris came back to the interview after receiving a perfect sound bite from her rep and had a second swing at the question: “I’ve been in this business for 15 years now so it’s been a very long time. And just like any other business person or someone in the industry it’s always important to reinvent yourself and come up with new projects,” she said.

Then she gave him a hug. Aw.