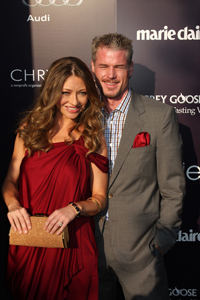 McSteamy is steaming up rehab today after Grey’s Anatomy star Eric Dane checked himself into a treatment center.

The actor, who is expecting his second child with wife Rebecca Gayheart, felt that a recently acquired taste for painkillers was “spiraling out of control,” says a friend.

“Actor Eric Dane voluntarily checked himself into a treatment facility to help him get off of pain medication that he was prescribed for a sports injury that he suffered over the recent hiatus. He reports back to work next week. Business as usual.”

The family friend said Dane decided to get help after hearing his wife’s baby news and figuring out he had “far too much to lose.”

Rumors of the couple’s drug use came to a head back in 2009 when a really weird video surfaced of the couple cavorting with Kari Ann Peniche naked while Gayheart said she was “so high.”