More details are emerging as to what caused the split between Jennifer Lopez and Marc Anthony, including jealousy, his controlling behavior and an affair with a stewardess.

What caused the split between Jennifer Lopez and Marc Anthony? It sounds like Anthony is much to blame! He reportedly cheated on Jennifer Lopez with a stewardess in 2009, just one year after the couple’s twins, Max and Emme, were born. 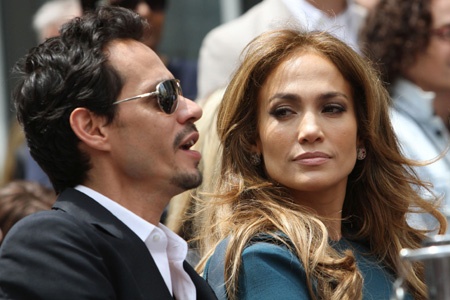 After learning of the affair, Anthony talked Lopez out of divorcing him by pleading with her to stay. She agreed and the couple underwent marriage counseling.

Anthony, 42, would often go to clubs without wearing his wedding ring (although we are sure everyone still knew he was married to Lopez) and was spotted flirting with women in clubs in New York and Las Vegas.

He was controlling over Lopez and became easily jealous if she was working with anyone attractive. He reportedly would “linger and watch over.”

“He couldn’t stand her working around men who were remotely attractive unless he was there supervising,” insiders reveal.

Sources say that even though Lopez appears confident, she “actually has low self esteem. And Marc really played into that insecurity. That’s why she put up with his abuse for such a long time.”

“It was a very bad marriage, and Jennifer got the courage to end things,” the source reveals. “[Marc] was a terrible husband.”

Luckily, Lopez has moved on and will undoubtedly be so much happier without him weighing her down. The divorce certainly hasn’t hurt her career, as she just got paid $1 million to perform at a private wedding in the Ukraine!