Kim Kardashian is suing Old Navy for using a lookalike in their ads, then using her name on Twitter to gain even more publicity. 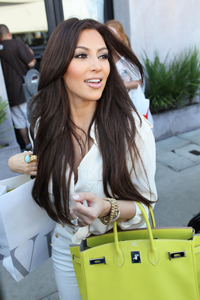 It’s bad enough that Kim Kardashian’s one and only true love Reggie Bush is dating a woman who looks exactly like her. Clothing retailer Old Navy has also gotten into the act by casting a Kim Kardashian clone in their ads and writing about the resemblance on Twitter.

The bride-to-be is not amused and has sicced her lawyers on the purveyor of cheap tees. The charge: That Old Navy intentionally used the impostor to trick her fans into thinking she was affiliated with the brand.

Kardashian is especially ticked that Old Navy has been writing about the obvious resemblance on Twitter, a move she says proves they are using her for publicity.

One such tweet read, “@CBSNEWS reports that Old Navy’s Super CUTE star looks like @kimkardashian. #LOL. What do you think?”

Kim Kardashian wants at least $15 to $20 million in compensation, which should help console her when she marries Kris Humphries instead of that one true love guy Reggie Bush.