Jillian Michaels says, at the circus, elephants are the biggest losers — and she plans to do something about it. 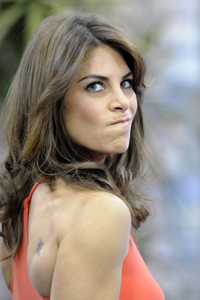 Jillian Michaels is more than just a fitness guru and GoDaddy girl. The former trainer on The Biggest Loser is also an animal lover who is turning her passion into action and joining PETA to protest the Ringling Bros. circus.

Michaels and throngs of others are disgusted by the horrible treatment of elephants in the circus and they plan to protest today to bring attention to their plight.

“These animals should be allowed to live as nature intended — free from beatings, chains and screaming crowds,” said Michaels, who recently spent time in Africa to observe elephants in their natural habitat. “Their enslavement by the circus means they spend their lives in chains and stuffy train cars with no freedom to roam, and they suffer painful, fatal ailments that come from such a stressful existence.”

Ringling Bros. has been at the center of the elephant controversy since receiving critical reports from elephant experts and a citation from the federal government that they are in violation of the Animal Welfare Act. PETA recently released undercover photos taken inside the Ringling training center showing baby elephants “stretched out, slammed to the ground, gouged with steel-tipped bullhooks, and shocked with electric prods. These abusive sessions go on for months in order to force the baby elephants to learn to perform circus tricks out of fear of punishment,” according to the animal welfare group.

Elephants are thought to be one of the most highly intelligent animals on earth, exhibiting high-level behaviors such as grief, learning, allomothering, mimicry, art, play, a sense of humor, use of tools, altruism, cooperation, compassion, self-awareness and their own language.

Jillian Michaels and PETA will be joined at the protest by members of In Defense of Animals, Last Chance for Animals and Animal Defenders International. If you are in the LA area and would like to join in and make your voice heard, the protest will take place outside the Staples Center where the circus is due to take place, at the corner of Figueroa and 11th and 12th Streets tonight, July 20, at 6 p.m.