Charles Shaughnessy is on set this week shooting scenes with former costar and Nanny, Fran Drescher. The Brit who played Mr. Sheffield to Drescher’s Nanny is clocking in for a swinging episode of Drescher’s TVLand series Happily Divorced and both of them are tweeting with happiness over The Nanny reunion. The Nanny‘s Renee Taylor is also along for the ride — and did you hear about Lou Diamond Phillips’ visit? 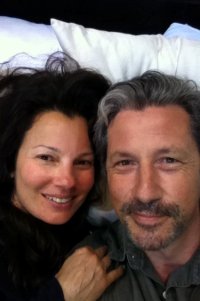 “Look who I’m playing with this week!” Shaughnessy tweeted Monday, July 18, with a link to this picture on the right.

“Charles Shaughnessy is workin this wk w us. Such a gr8 guy,” tweeted Fran Drescher, who must have approved of the makeup-free shot her pal posted.

While some 53-year-old women might be horrified by such a thing, SheKnows has gotta say, Drescher has no reason to complain. She looks fab!

The Nanny duo has united on TV three times since the show ended 18 years ago. First, there was 2004’s The Nanny Reunion: A Nosh to Remember, then Shaughnessy was a guest on The Fran Drescher Show and the former Mr. Sheffield also played Drescher’s ex-husband on Living with Fran.

Now, they’re jumping back into bed together on TVLand’s Happily Divorced and rumor has it Shaughnessy will play a swinger. That explains the bed shot — or does it? Since her hubby’s now gay, will Fran investigate another alternative lifestyle?

Renee Taylor, who played Drescher’s mom on The Nanny, will also get in on the Happily Divorced reunion. Taylor will play the neighbor to Drescher’s new onscreen parents, Rita Moreno and Robert Walden.

Lou Diamond Phillips was also on set at Happily Divorced, but that was last week. “Wht a hunk!” Drescher tweeted on July 14. He’s also slated to air in August, but SheKnows imagines he’s in the episode before The Nanny reunion.

In other reunion news, Drop Dead Diva‘s Ben Feldman (Fred) told SheKnows he tried to lure his Living with Fran onscreen mom into visiting his new show, to no avail. Drescher’s way too busy with her new show, but Feldman might be able to find time for some laughs on Happily Divorced — assuming Lifetime and TVLand let it happen.

SheKnows has that airdate! Shaughnessy will be on Happily Divorced on August 10, 2011.