Hugh Hefner says he dodged a bullet when former fiancée Crystal Harris called off their wedding. 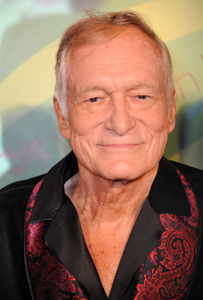 Perpetual playboy Hugh Hefner is not dead, but he is confused about being dumped by Crystal Harris just days before their wedding.

“Holly [Madison] suggested that I missed a bullet, and I think it’s probably true,” Hef told ET. “Quite frankly, I don’t know what I was thinking about. I think my natural state is single. I’ve tried marriage twice, not successfully. These were not the happiest times of my life.”

Holly Madison actually ripped Crystal Harris a new one on Twitter right after the breakup — Hef’s old ex was never a fan of his new ex and was extremely critical of the engagement in the first place.

What Hef doesn’t get, though, is that to him the breakup came out of nowhere.

“Birthday cards were filled with messages of forever,” he said. “‘You’re the man of my dreams, I’ll love you for the rest of my life.’ There was no clue [she wanted to split]… I didn’t see any of this coming.”

“If you’re having reservations about the person you’ve been with for two-and-a-half years, the logical thing is to sit down and talk about it,” Hefner said.

What we really want to know is if Hef thinks Harris was cheating on him with Dr. Phil’s son.

“I think in retrospect, there’s something more to this than we all know, that will come to light in time,” Hef said. “If Dr. Phil’s son is involved, that’s certainly only part of the picture.”

Get the full scoop on what went wrong — and how Hef is dealing with it — when Hef’s Runaway Bride airs tonight on Lifetime.