Matt Damon says he never wants to be a prisoner of his own fame like pals Brad Pitt and Angelina Jolie. 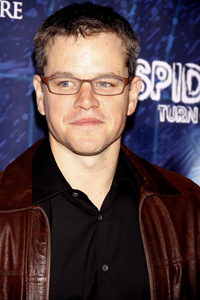 Matt Damon is a huge box office star, but he lives his life out of the spotlight — exactly how he wants it.

“I have friends who are like prisoners. Brad Pitt and Angelina Jolie, for instance,” the star of The Adjustment Bureau told German television TELE 5. “They can’t just go someplace. If they go for a walk, it turns into an international incident.”

“I’m really lucky, because I have the best of both worlds. I do the work that I love and need, but don’t need paramilitary troops to protect me when I walk out my front door.”

So how did Damon manage to create a semi-quiet life when so many other celebs are hounded day and night?

“I’m not as crazy as most of the other stars. I don’t really know why, probably because I married a woman who isn’t an actress,” Damon said, referring to his former makeup artist wife Luciana. “And we live in New York. As long as we don’t show up in typical tourist spots, we can walk the streets without being noticed. New Yorkers are very cool, they don’t flip out if they see me.”

Guess that means we won’t be seeing a Matt Damon sex tape any time soon. Bummer.