Chris Evans is also ready for the storm of attention that Captain America: The First Avenger will bring him, starting with his visit to this year’s Comic-Con to show the film to fans. 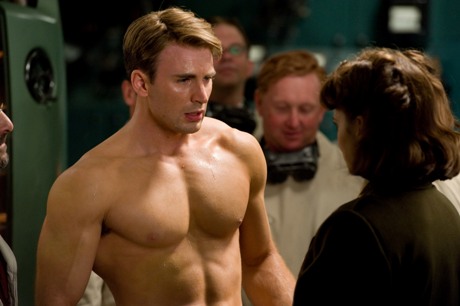 Evans visited with us for a chat at the Four Seasons in Beverly Hills to take us inside his world as he is about to go from relative unknown to movie superstar. His face is everywhere. Evans even told us people are now asking him for autographs at the gym. Everything is changing… is this shy actor from Boston ready for his close-up? You bet!

Chris Evans: The Captain is in

SheKnows: With Captain America about to arrive, your life is about to change in a big way. Are you prepared?

Chris Evans: I don’t know. Hopefully, I’ll be the exact same guy. I just moved back to Boston. That’s a big thing. That helps a lot for me. There’s something about L.A., where just even when you’re not working, you feel like you’re working. I don’t know what that is. It’s just the heartbeat of this industry. Just about anyone you run into or talk to, it feels almost like work to me. And then, you go back to Boston. My buddies hate my movies. They think I’m the worst actor on the planet [laughs]. I’m very quickly reminded of who I was and who I am. It’s a much healthier environment for me. So hopefully, in 10 years, I’ll be the same guy, and hopefully, I’ll be able to attribute that to the people who knew me before.

SheKnows: Between playing Captain America in Captain America: The First Avenger and the upcoming The Avengers, how does it feel to finally have people see you as Cap? 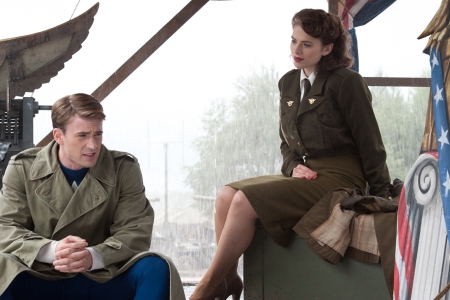 Chris Evans: Awesome, man. That’s part of the worry. It was nice continuity-wise to be able to go literally from Captain America right into The Avengers — to keep yourself in the same frame of mind is nice as an actor. But, it’s also nice to get some feedback from the audience. At the end of the day, we’re making these movies for the fans and especially the hardcore fans. They’re the ones that I’m most concerned about. They’re the ones that I’d love to get some response from and adjust accordingly. If they thought one way or another, I’ve got no problem cutting my cloth according to what people are looking for. Because, like I said, we wouldn’t be making them without them. It is tricky not being able to gauge the response before diving into The Avengers. If they hate it, hopefully I can make some adjustments before the sequel.

SheKnows: Your face is everywhere — on posters, toys and billboards. You’re heading to Comic-Con to talk about the film. What’s this time like for you?

Chris Evans: I just gotta get through this week [laughs]. That’s what I’ve been telling myself since like three weeks ago. If I can just get to the 22nd, I’ve made it. This is all tricky stuff for me. I feel very self-conscious. And I knew that’s what was coming. I knew that was going to be the wave of attention. I went to the gym yesterday, at Bally’s, and it was different, just different. You’re signing things. You’re like, man, I guess I knew this was going to happen. It’s going to come in waves. That’s what I keep telling myself. This is just now. This is just right now. In three months, I’ll be able to go back to Bally’s and no one will bother me. One day at a time. That’s the mantra.

SheKnows: Did you talk to your co-star, legend Tommy Lee Jones, or anyone else about handling the attention? 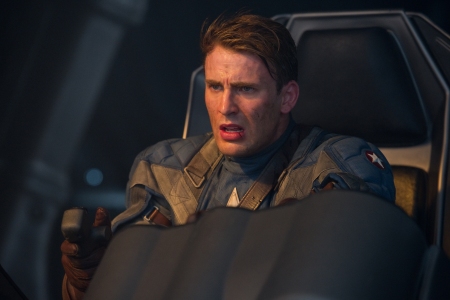 Chris Evans: Sure. (Avengers co-star) Downey has been fantastic. I cannot say enough about Robert Downey Jr. I love that guy. I love him. He’s so great and he’s so willing to talk about this stuff. This is all new for me. I’ve made movies, but nothing like this. It’s great to be able to talk to someone who’s been in a spot like this for good and bad reasons. He has so much presence and charisma and confidence. He seems so centered and peaceful. He seems to like life. He seems happy. Isn’t that the goal?

SheKnows: What made you decide to take this role after you turned it down initially?

Chris Evans: I chose to do this movie because it was the thing that I think I was the most scared of [laughs]. You know what I mean? I think it was one of the things that at first I ran from it because it was just not what I was looking for. But it wasn’t what I was looking for because I was just scared of it for a lot of reasons. And then, all of a sudden, it did like a 180. All of a sudden it felt like, you know, Chris, if you’re scared of something, you should just push yourself into it. Just do it. I think you regret the things you don’t do more than the things you do, especially if you don’t do it out of fear. So I did it because I was scared of it. 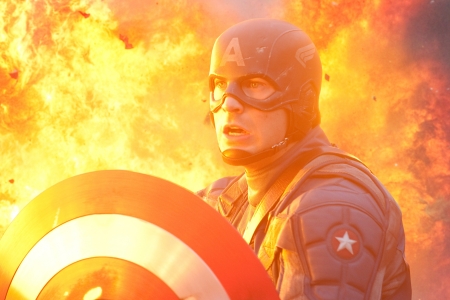 SheKnows: Did you resist because it was playing another superhero after you portrayed one in Fantastic Four?

Chris Evans: No, I would have been fine playing a superhero if it was one movie and I would have been fine playing a superhero maybe if it was my first time around. The reason I was scared was because initially it was nine pictures. Then it came down to six movies. Even six movies — that’s 10 years, dude. I mean, I could be doing this until I’m 40 [laughs]. I don’t know what I’ll be passionate about tomorrow. What if I just don’t want to do this anymore? What if it gets weird or too much or I fall in love with writing or something else and I just want to do something else? Or, I just want to move to the mountains [laughs]. My freedom is gone if I do this movie. You’re signing something away and I just guess I wasn’t 100 percent positive that the end game in my life was to be a gigantic movie star. And if you’re not 100 percent committed to that goal, making this decision is kind of scary. That, mixed with it’s a big lifestyle change too.

SheKnows: This movie should be a vehicle for you to be able to hone in on some passion projects for you. Do you have any in mind?

Chris Evans: Porno [laughs]. I think I’d be great. I really think I’ve got a future. Seriously, I’m glad this is being recorded [laughs]. I would love to direct. I’ve been saying it for a while. It’s a tricky thing to make the transition because I’ve never directed before and it’s going to take a really crazy person to trust me with a film. I can’t tell you how often I sit on set and just desperately wish I was in charge. It’s not just about being a control freak. It’s that I love films and I love acting. I think the reason I got into acting is because I like movies. I just love movies. There’s nothing I don’t like. Pick a genre, I like it all. I would be happy to direct anything. You could give me any movie in the world and I’d be happy to direct it. I would just love to create the story, create the journey a little bit more, and I think it would suit what I’m looking for as far as a lifestyle is concerned. I think it would really fit me well.

Chris Evans is super in Captain America: The First Avenger