Justin Bieber will perform a private concert for David and Victoria Beckham’s kids — and in exchange he gets free soccer lessons. Sounds like a win-win! 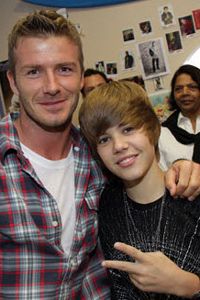 Justin Bieber will learn soccer skills from soccer stud David Beckham — and all he has to do is give a private concert to David and Victoria Beckham’s four kids.

Brooklyn, 12, Romeo, 8, Cruz, 6 and one-week-old Harper Seven will get a private concert from the Biebs himself.

“I’ve agreed to give the boys a private concert at their house — if David gives me some private soccer lessons,” Justin says. “David’s an amazing dad, and he told me how happy it would make the boys, so I had to say yes.”

In fact, Justin might bring along someone very special to his private concert. “Maybe now they have a girl, Selena [Gomez] will have to come too, and dedicate a song to Harper.”

The Biebs sent over signed guitars to the Beckham boys earlier this year and Posh posted a picture of them on Twitter and thanked him.

“David tells me my records are always played in their household, and David and Victoria are both really cool, so I’m happy to oblige,” Bieber says.

He also says that he thinks the Beckhams will have another baby! “David and Victoria are great parents; they will do anything for their kids. People thought they would stop now they have a daughter but I’m not so sure, they both love kids so much I can see them having one more.”