Rapper Lil Boosie was caught smuggling drugs into prison — and it wasn’t the first time!

Apparently life in prison is hard. In fact, it’s so hard that rapper Lil Boosie opted to add time to his already lengthy prison bid by smuggling drugs into lockdown. 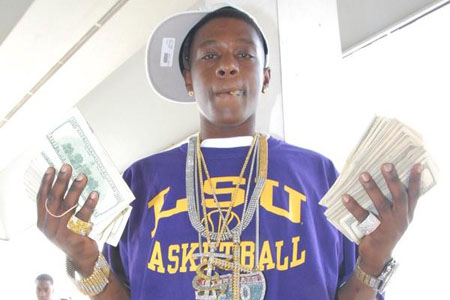 Lil Boosie — real name, Torrence Hatch — is charged with allegedly trying to sneak the codeine-based drink Sizzurp into the Louisiana State Penitentiary at Angola. You might remember that Sizzurp was also the reason rapper T.I. went back to prison last year.

This is the second time Boosie has tried to sneak drugs into jail — he’s also charged in a separate smuggling incident at the Dixon Correctional Institute in Mississippi.

Boosie isn’t in jail just for the drug charges, though. He’s currently serving four years on other drugs and weapons charges, along with a newer charge of first degree murder for ordering the murders of two separate men — by a 16-year-old boy!

The rapper is a piece of work — he did an interview with The Smoking Section in 2009 where he talked about his, uh, non-respect for women and drug use.

“These last six months they’ve had me on house arrest. I can’t smoke marijuana. I can’t do any of that… I can’t go hard like I used to. They wanna see my pee and all that. I’ve just been chilling. I’m more focused with the music though.”