Prince William and Kate Middleton have some fancy new digs. The royal couple has moved into Kensington Palace! 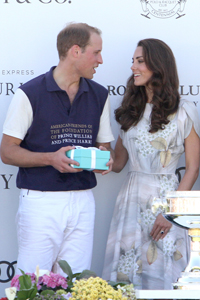 It’s official: Prince William and Kate Middleton have moved into their new digs at Kensington Palace.

The modest — by palace standards, of course — apartment has two bedrooms and one bathroom, making it a cozy little love nest for when Will and Kate are hanging out in London.

The move marks their first official royal residence as a married couple. They were previously sharing a suite of rooms in Clarence House with Prince Harry, who probably leaves his smelly socks all over until the butler comes to pick up.

But the new apartment is only temporary. The couple will likely move into a much larger suite as soon as they begin to spend more time in London for their official royal duties.

The palace is quite familiar to Prince William. He grew up there, in apartments eight and nine which were Charles and Diana’s official residence when married and Diana’s after the divorce. That location is currently undergoing renovations and could very well be the spot Will and Kate end up in soon.

As for now, the couple still considers their rented home in Anglesey, where William is training as a helicopter pilot with the Royal Air Force, to be their main home.

read on for more will and kate