Limitless announced Bradley Cooper as a star. The Hangover franchise anchor had not anchored a film prior to Limitless, so when it debuted at number one, a star was born.

Limitless is coming home for audiences to discover the magic that is Bradley Cooper. 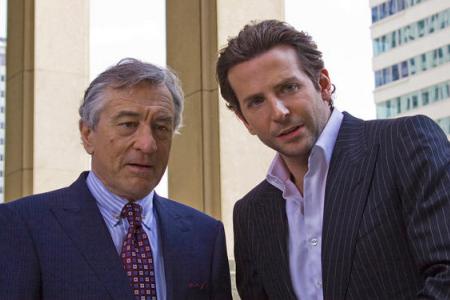 We adored Cooper since first discovering him opposite Jennifer Garner on the JJ Abrams TV hit, Alias. It’s been a fascinating and joyous journey to see the actor bloom into a full-fledged movie star. What’s also a pleasure is witnessing Cooper’s performance opposite a film legend in Robert De Niro. Cooper famously asked De Niro a question at an Inside the Actor’s Studio taping when Cooper was only a student. Now, he is headlining a film with him with Limitless.

Limitless stars Cooper as Eddie Morra, a man who discovers a pill that unlocks the entire spectrum of his true brain potential. Immediately, Morra unleashes incredible power of memory, knowledge and physical fitness.

Soon after, Morra learns that every up has its down as what was a dream becomes a nightmare. The drug’s side effects begin to wear on him as Cooper gets caught in a web of deceit with a less-than-savory Wall Street biggie (De Niro).

So sit back, and enjoy the superstardom that has come Cooper’s way and don’t miss our clip from Limitless.