Lady Gaga’s little monsters loved her new act in which she was dressed as a mermaid and rode around in a wheelchair. Sound familiar? Bette Midler sure thinks it does!

Lady Gaga’s new act in which she is dressed like a mermaid sitting in a wheelchair has offended disability activists — and Bette Midler! 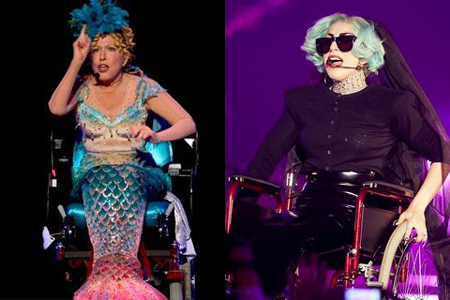 Calling herself Yuyi and wearing a blue wig and a mermaid outfit, Lady Gaga performed for fans at Sydney’s Town Hall. Even though her fans loved it, Bette Midler was less than thrilled.

Midler is referring to her wheelchair mermaid performance that she has been performing since the 1980s! “Dear @ladygaga Ive been doing singing mermaid in a wheelchair since 1980,” she wrote the next day. “You can keep the meat dress and the firecracker tits — mermaid’s mine.”

Bette Midler was not going to let this go!

Lady Gaga’s response? “I had no idea that she did that and I’m a huge Bette Midler fan,” she told Billy Bush of Access Hollywood. “Maybe we’re just cut from the same cloth. I couldn’t hop around in that tail so I just stuck myself in a wheelchair.”

She went on to say, “Obviously I feel connected to women in theater and women from the past. All I’ll say is that I… admire her and find her to be one of the most brilliant and incredible performers, so that’s all I’ll say.”

Midler must have accepted her explanation, as she recently tweeted: “Let’s drink this over at the Emmys in September. Fabulous mermaids can coexist!”