Neil Patrick Harris says he was trying to be original when naming his twins, but being copied by people like the Beckhams isn’t so bad. 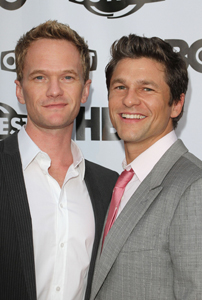 Gideon Scott and Harper Grace were born to Neil Patrick Harris and his partner David Burtka nine months ago, and fans were pleasantly surprised when they were given normal yet original names instead of the weird “Look at me, look at me!” names celebs usually give their kids (Bronx Mowgli, anyone?).

Original, that is, until Victoria Beckham went and named her baby Harper. What does the How I Met Your Mother star think of this baby name theft? He talked to Jay Leno about it on The Tonight Show.

“Beckham’s daughter’s name is Harper Seven… Ours is Harper One,” Harris joked. “Isn’t that exciting? Once the Beckhams have a kid that’s got your name then it’s really cool all of a sudden. Now we just have to have the Pitt-Jolies name their next kid Gideon and we’re in!”

“I wanted it to be kind of a unique name.”

Check out Neil Patrick Harris on The Tonight Show with Jay Leno: