Where is Casey Anthony? After three years in a Florida jail, Casey Anthony walked out of jail after midnight on Sunday with her attorney, flanked by security guards. Anthony’s whereabouts have been a closely guarded secret, however, new sources are giving a clue as to where she could be hiding out.

After being found not guilty of killing her daughter Caylee, Casey Anthony’s defense team has shared their concern about the safety of Anthony since her Sunday release from jail. She has reportedly received death threats and the public is outraged over the not-guilty verdict. 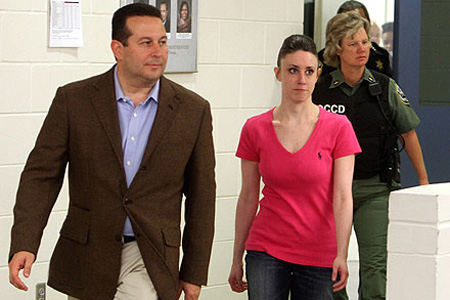 After leaving the Florida jail on Sunday, Anthony was last seen being whisked away in a car. Where is she now?

“I will not confirm if she boarded a plane or flew on her own,” Anthony’s defense attorney, Cheney Mason, said. “She’s gone, she’s safe, and elaborate plans had to be made to keep the people away from her.”

According to reports on the Today show, Anthony boarded a Pilatus PC-12 private jet out of Orlando on Sunday morning. The plane took a “circuitous route,” stopping in Prescott, Arizona, before landing at John Wayne Airport in Orange County, California.

California attorney Todd Macaluso, who used to be part of her defense team, is reportedly involved in helping her hide out. In addition to giving her $70,000, reports indicate that it was his firm’s private plane that took her to her hide-out.

The Today show says Anthony could be staying in Carlsbad, California, which is an upscale coastal community near San Diego.

Macaluso denied his involvement to San Diego news on Monday. “It’s a closely guarded secret I’m not part of,” he told reporter Allison Ash. “I don’t even want to know.”

What is Anthony doing while hiding out? She is reportedly working on writing a book and gearing up for her first post-jail interview. People is reporting she also plans on making money off of a pay-per-view TV interview.