Upon hearing the news that Lamar Odom’s car accident victim had passed away, the basketball star and wife Khloe Kardashian took to their Twitter pages to offer words of condolences. 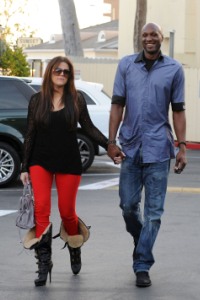 Lamar Odom’s car accident occurred while he was in New York for his cousin’s funeral, and now not only is the Lakers star mourning his family member, he’s grieving over the loss of a stranger.

The 15-year-old boy who was involved in Lamar Odom’s car accident has passed away. Lamar wrote on his Twitter page Monday night, “Thank you for your support and prayers! My thoughts and prayers are with the young boys family.”

Lamar Odom‘s wife Khloe Kardashian, rumored to be pregnant with twins, had more to say about the young man’s passing. “My heart/soul goes out 2every1 in pain from any suffering,” Khloe tweeted. “Pray 4 all of the angels surrounding us constantly. May our spirits stay strong.”

Khloe Kardashian continued, “Above all, love each other deeply, b/c love covers over a multitude of sins. Offer hospitality 2 1another without grumbling 1 Peter 4:8-9.”

“Therefore, do not worry about tomorrow, for tomorrow will worry about itself. Each day has enough trouble of its own,” wrote Khloe. “Our love will give us strength! Love conquers ALL!”

However, not all were supportive in the Twitter-verse. In response to some users, the 27-year-old wrote, “Stop judging other people’s lives that u know NOTHING about! My husband&I r in NY 4a funeral 4 his fam. Senseless violence is disgusting!!”

Khloe Kardashian went on to say, “A family member of his was killed and some of the comments you are saying due to the fact I am off twitter today are disgusting. Makes me think twice about social media.”

Our thoughts go out to Khloe and Lamar for the loss of his cousin, as well as to the family of Lamar Odom’s car accident victim.