Emma Watson says she will return to Brown eventually — after she spends this year as an exchange student. 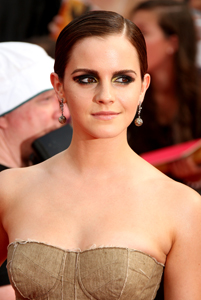 All Emma Watson wanted was a decent education, but this pesky business of making and promoting one of the most successful film franchises of our lifetimes — ahem, Harry Potter anyone? — has sort of gotten in the way. She left the prestigious Brown University amidst rumors of bullying, which she laughed at. So will she ever return?

Absolutely, the young star says — just not right away.

“Abroad” meaning “in her native backyard.”

“I’m going to Oxford in the fall to study English for a year.”

Smarty-pants Watson planned ahead for having to take so much time off — she doubled up on credits and is right on track for an on-time graduation.

“I’ll go back to the States to do my last year. I took a semester off, but my credits actually count as an advance, so I’m no further behind. I’m still technically going into my third year.”

Don’t worry, fans — Watson has no intention of leaving your local movie screen any time soon. In addition to two upcoming films, My Week with Marilyn and The Perks of Being a Wallflower, she is lined up to star in a new adaptation of Beauty and the Beast.

Emma Watson is currently promoting Harry Potter and the Deathly Hallows Part 2 and busy being one very positive role model for kids who want to break into acting.

read on for more emma watson

Emma Watson: ‘It’s all coming to an end’
Dating is a ‘nightmare’ for Emma Watson
Emma Watson: It was harder to kiss Ron in Harry Potter