Whoa boy! It’s going to be a season to remember starting August 4th on Jersey Shore. Not only does war break out between the housemates, but there are dangerous fistfights, hookups you wouldn’t believe and enough shenanigans to warrant a part two of season four! Yet, love always prevails and our favorite party people return to their mantra of being a family, but will that be enough to weather these climactic storms?

Things do not bode well for our Jersey meatballs as they visit the land of their heritage, Italy, during season four of Jersey Shore. It is the most climactic season yet, as friendships are tested, relationships are strained beyond repair and hookups you will not believe occur in places you can only imagine! 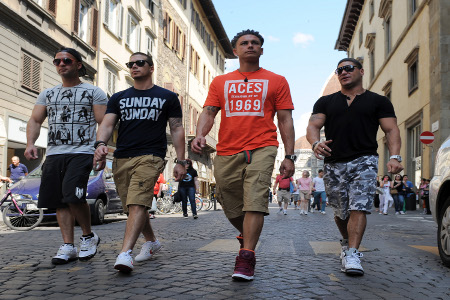 It all starts when the reality stars find out they are going to Italy for season four. After two years of shuttling between the Jersey Shore and Miami, a change of pace just might be what the doctor ordered to fix this fractured television family. Or is it?

First off, the hookups. Deena Nicole and Pauly DelVecchio? Snooki and Mike? What’s in the water in Italy that makes best friends get together with one another and regret it later? Snooki and Mike have a standing history of flirtation, but Deena always said she liked her men like “lean cuisines,” and initially, Pauly didn’t fit the bill. But it seems she’s changed her tastes! As for Snooki and Mike, their flirtation seriously damages Snooki’s months-old relationship with boyfriend Jionni, and you see it unravel on the streets of Italy as she chases him down a cobblestone street.

There’s also Snooki’s subsequent car accident with a police car, where she is arrested and investigated only a week into their visit.

Vinny Guadagnino, who is the only castmate who wants to “learn” something in Italy, stated, “I want to learn Italian and master the language and meet a nice, real, traditional Italian girl.”

While the cast was dismayed initially at the thought of heading overseas to Italy, where they might not be so well-received, they soon warmed up to the idea, with Jenni “JWoww” Farley stating, “JWoww and her boobies are going to Italy.” Mike “The Situation” Sorrentino revealed, “I’m going to the motherland. I’m going to the bloodlines of The Situation.”

But after only two weeks in the piazza, with plenty of restrictions placed on them by the Italian government, it seemed that the cast was getting a little stir crazy for some shore excitement, so they created their own drama. This culminated in a fight to end all fist-pumps between Mike and Ronnie Ortiz-Magro, who beat each other so badly that both the police and an ambulance were called.