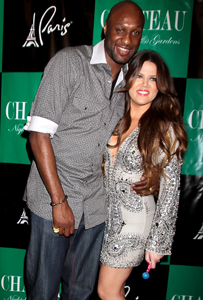 A 15-year-old boy is dead after he was struck down by a car carrying Khloe Kardashian‘s husband Lamar Odom.

The boy’s family confirmed that the boy died Friday morning after being struck by a motorcycle that was in turn struck by the car Odom was in Thursday night.

The basketball star was in Queens, New York — where he grew up — to attend the funeral of his cousin and was on his way to the barbershop when the Lamar Odom accident occurred. Witnesses say he was distraught at the scene.

The teen’s funeral was held today.

Khloe Kardashian was not in the car when all this went down, but she was in NYC. To be clear, Odom was not driving at the time of the accident — he had hired a car service.

There is no news on the condition of the motorcyclist.

This incredibly sad turn of events rather puts a damper on the rumors that Khloe and Lamar are expecting twins.