This is all sorts of wrong: Skyscraper singer Demi Lovato is reportedly seeing 36-year-old Ryan Phillippe, according to E! News. The entertainment network claims that the father of (possibly) three has been seeing Lovato for a few weeks. 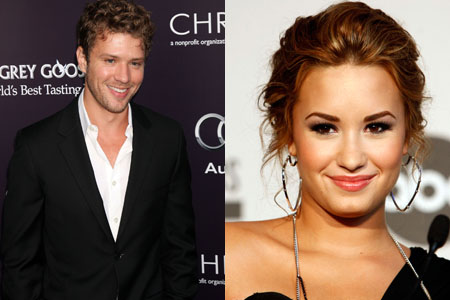 “It was really hot and heavy for a while,” a source close to the odd couple told E! Lovato didn’t know Phillippe was for sure going to be a new dad, “until it basically happened. It kind of threw her for a loop.”

Lovato and Phillippe’s reps haven’t responded to SheKnows’ requests for comment, but another source told E! that the relationship never happened and that the single dad is “completely single.”

Lovato’s been through a lot in the past year.

“It was the elephant in the room,” the singer said of the problems that led her to rehab. “Everybody wanted to say something, but nobody knew how to approach it. It was affecting every aspect of my life. I was being cranky, I was irritable, I was not pleasant to work with. I became like a little brat — I had so much growing up to do. I wasn’t trying to be that way, but I just had so much going on in my head… I ended up doing things that I regret to this day.”

Do you think Demi Lovato and Ryan Phillippe should be dating?