Friday singer Rebecca Black debuted her new single and music video, My Moment, today. Watch it in all its auto-tuned glory and tell us — is it cute or has Hollywood gone to her head? 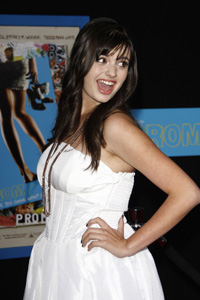 Rebecca Black shot to fame when her song Friday went viral and got 167 million views on YouTube, thanks in part to the auto-tuned singing and laughable lyrics.

Just when you thought her 15 minutes of fame had run its course, the 14-year-old releases her new single called My Moment.

“Weren’t you the one that said I would be nothing?” Black sings at the beginning of her song. “Well, I’m about to prove you wrong. This is my moment.”

“I’ve waited for so long. I’m about to blow up,” she continues.

Black does look cute and the song seems a little less auto-tuned than Friday — and it does contain the unpolished look that fans loved to hate in her first video, such as awkward pointing and dancing.

As Black sings, it shows clips of her posing on the red carpet, signing autographs for fans and getting her makeup applied. This video is quite a change from riding in a car with her friends singing about the weekend.

In fact, has Black gone Hollywood? She does have quite a few celebrity fans including Lady Gaga and Katy Perry, who put her in her Last Friday Night (T.G.I.F) music video.

Although one star, Colbie Caillat, is not so impressed. “The song is so ridiculous and foolish that you have to laugh,” Colbie said, referring to her Friday song. “It is not a good song but it is really funny.”

My Moment is the first single from her upcoming five-track EP that she plans on releasing next month.

Watch the video for Rebecca Black’s new song, My Moment, and weigh in below!