Katy Perry and Russell Brand are striking back after rumors began circulating that the couple is considering a trial separation. 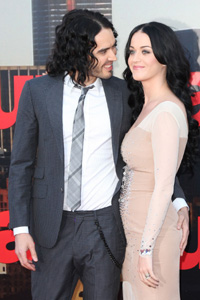 Are Katy Perry and Russell Brand on the rocks? Amid rumors of a split, both took to their Twitter accounts to clear the air.

Heat magazine is reporting that Katy and Russell have only spent four days together in the last six months and that distance has taken its toll. She is busy on her tour and he is busy working here in the US.

The magazine cites a source as saying that Katy confessed she is “thinking of taking a break from our marriage” and that she is “worried it could be the end of the road.”

Shortly after she said this, more rumors surfaced that said Brand was spotted with a “mystery brunette who looked just like Katy.”

Russell and Katy’s response? All hogwash!

“Just ’cause we don’t flaunt our relationship doesn’t mean there’s something wrong with it,” Katy tweeted. “Privacy is our luxury. #tabloidsrtrash #gossipisgross.”

Russell chimed in, tweeting: “You tell em Mrs Brand! In Britain we’re currently dismantling the scum media so I’m not tuned in to their brain-farting.”

Breakup rumors are nothing new to the couple, as Perry sued the Australian tabloid AW a couple of months ago for claiming she has been unfaithful to Russell.