The first trailer for the upcoming The Dark Knight Rises, directed by Christopher Nolan, features a Batman-less Gotham City. 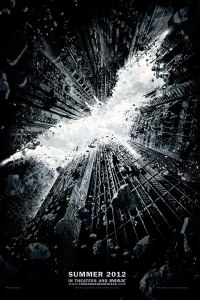 Imagine a world without Batman. It’s not a pretty picture.

The first trailer for the upcoming The Dark Knight Rises, the third in the trilogy of Christopher Nolan-directed Dark Knight movies, features a Batman-less Gotham City literally crumbling at its foundation and an ax being taken to the Bat signal.

Batman (Christian Bale) is apparently still on hiatus after checking out following the mess caused by the Joker and Two-Face in the last movie, 2008’s The Dark Knight.

“We were in this together, and then you were gone,” says Commissioner Gordon (Gary Oldman), confined to a hospital bed. “And now this evil rises. The Batman has to come back.”

The evil Bane is doing push-ups in a jail cell and he looks ready to cause some damage.

“If you make yourself more than just a man, if you devote yourself to an ideal, then you become something else entirely,” says Liam Neeson as Ra’s Al Ghul in a voiceover. “A legend, Mr. Wayne, a legend.”

We’ll put our money on the legend.

The trailer made its debut during weekend showings of Harry Potter and the Deathly Hallows Part 2. It looks like we’re in for some serious twists and turns when The Dark Knight Rises comes out next summer.