Vanessa Hudgens’ new role in Gimme Shelter sent the young actress to visit a shelter for homeless pregnant teens. Oddly enough, the experience has Vanessa wanting a baby of her own! 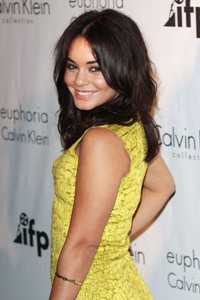 Perhaps Vanessa Hudgens is a wee bit too young to be familiar with the concept of Scared Straight. A recent visit to a homeless shelter for pregnant teens has the actress wishing for a baby of her own!

Of her two-week experience visiting a shelter for pregnant teens, Vanessa Hudgens says, “It was very crazy and very, very interesting and kinda made me obsessed with babies.”

The 22-year-old continues, “I did get to know the girls and they were so amazing and really let me into their head and, like, took me through their struggle… It was so humbling.”

Speaking of the girls in the shelter, Vanessa Hudgens says, “They don’t care about the celebrity; this is real life. These girls are just trying to get by.”

In Gimme Shelter, Vanessa Hudgens portrays a young girl who runs away from her abusive mom and then is kicked out of her father’s house for refusing to abort her unborn child. Vanessa, and director Ron Krauss, took the matter of chopping her hair into their own hands.

“I grabbed the scissors and started cutting my actual hair and then my director decided that he was going to grab the scissors — he grabs a chunk of my hair and just chops it,” she explained.

“Honestly, I kind of feel like a soccer mom, but we’re going to let that go,” Vanessa Hudgens said of her new look on Monday’s Access Hollywood Live. “There’s nothing wrong with soccer moms, but I’m only 22!”